Could drone deliveries help the environment? Let’s unpack that 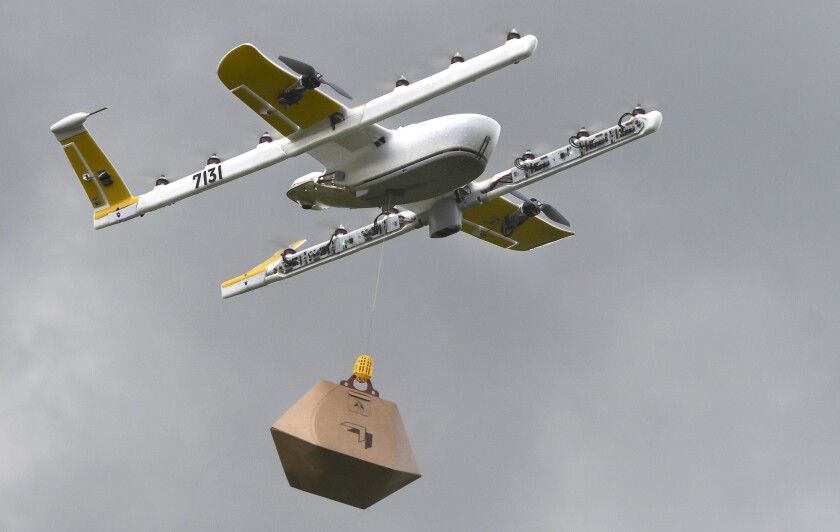 Drones delivering packages could help reduce greenhouse gas emissions — depending on how and where they’re deployed. Above, a Wing Hummingbird drone.
(Michael Shroyer / Associated Press)
By SAMANTHA MASUNAGASTAFF WRITER

In the era of e-commerce, it takes a single click to order anything you’d like. But it takes a lot of energy to bring it to your door.

Items are shipped from factories, shuttled between warehouses and finally trucked to your home. This convenience comes at an environmental cost — transportation accounts for 29% of U.S. greenhouse gas emissions, with medium- and heavy-duty trucks accounting for nearly a quarter of that.

Technology enables this problem — and some will tell you that technology can help solve it.

Drones have been touted as a clean, fast way to appease our demand for quick deliveries. When Amazon.com Inc. unveiled a new design in June for its Prime Air delivery drone, it framed the initiative as part of its vision to make half its shipments net zero carbon by 2030. Wing, a division of Google parent Alphabet Inc., heralded its service as helpful in easing greenhouse gas emissions. After UPS first publicly flew a drone from the top of a delivery truck to drop off a package at a home, an executive called the test a “big step” toward reducing UPS’ emissions.

Drone delivery operations could indeed be more environmentally friendly than trucks, according to two recent studies. But that depends on how and where they are deployed.

Where they plug in

Small drones have a lower environmental impact than ground-based delivery methods, including diesel trucks, trucks powered by natural gas or even electric vans, according to a study published last year in Nature Communications. But drone batteries need to be charged, and that power has to come from somewhere.

For drones to live up to their green potential, plugging into clean power sources is vital. Access varies from state to state and from utility to utility.

Thanks to solar power, California frequently generates more electricity than people can use. The study in Nature Communications concluded that a one-pound package delivered by a small drone in California would reduce greenhouse gas emissions by 54% compared with a diesel truck. The same delivery in Missouri, which gets most of its electricity from coal, would result in a reduction of just 23%.

“When you have low-carbon electricity and you’re moving small packages, drones could have the lowest carbon footprint per package delivered,” said Costa Samaras, associate professor of civil and environmental engineering at Carnegie Mellon University and a co-author of the study. “It’s much greener to have a drone flying through the air to deliver you a set of headphones than for you to get in your gasoline-powered car or even your electric car and drive to the store and get it.”

Wing operates commercial drone delivery service in Christiansburg, Va.; Canberra, Australia; and Helsinki, Finland. In Canberra, Wing is powered by nearly 100% renewable energy, while Helsinki uses a mix of nuclear energy, renewable energy and fossil fuels, said Jonathan Bass, Wing’s head of marketing and communications. Virginia, on the other hand, is predominantly powered by natural gas and nuclear energy. All three locations’ power sources are getting cleaner over time, he said.

The fewer warehouses, the better

The longer a drone can stay in the air and deliver packages, the more useful it is.

But drones have much shorter ranges than trucks, and charging stations are far less common than gas stations.

So delivery companies will need a vast network of charging stations. It’s easy to put those stations in warehouses, where the drones go anyway to load up on packages.

Because of our desire for quick deliveries, the nation is already seeing a warehouse boom. One billion square feet of warehouse space was built nationwide over the last decade, with a big boom in the Inland Empire, a CBRE study found last year.

Building a broader network of warehouses to accommodate drones’ needs would have serious environmental repercussions. More warehouses means more lighting, heating and air conditioning systems, not to mention the energy required to charge drones between flights, all of which add to the overall emissions from the service.

Rather than building new warehouses, drone delivery companies could use existing facilities — for example, drones carrying food could take off from the top of a grocery store. Amazon would be well positioned to do that, as it already has more than 500 Whole Foods stores and is experimenting with new grocery concepts.

Developing higher-capacity batteries for drones could also help: If drones could fly farther, the network of warehouses and chargers could be less dense. (Currently, drone use in the United States is limited by rules against flying over humans or beyond the operator’s line of sight. But those rules are expected to loosen in the years ahead, and some companies already have waivers.)

Another option is deploying drones from delivery trucks when removing a few packages could streamline a driving route. The truck covers much of the distance — then takes a big load of packages one way while a drone carries some the other. Then the drone can meet up with the truck to make other such deliveries and eventually be returned to the warehouse.

A study published last year in the journal Transportation Research Part D concluded that drones are best at delivering a few packages at a time, while trucks are better at taking large quantities to more densely populated areas.

“It’s important to remember these modes can be used in complement,” said Anne Goodchild, a co-author of the study and director of the supply chain transportation and logistics center at the University of Washington. “We shouldn’t just compare drones versus trucks.”

Off the beaten path

The logistics industry has inched toward some environmentally minded solutions in urban areas, such as Amazon Lockers, where a single gas-powered truck might drop off packages for dozens of customers. But that approach doesn’t necessarily work in rural areas, where residents are more spread out and trucks haul packages to every doorstep.

That’s where drones could be a more efficient way to carry packages on the “last mile” of delivery, researchers say, especially since there are fewer obstacles — such as power lines and buildings — for them to avoid.

“A drone can’t really compete with a very full truck making 100 deliveries in a fairly small space,” Goodchild said. “The farther apart those customers are, the less room for consolidation, the more competitive a drone can be.”

But they won’t be able to handle everything, at least initially. The current crop of drones envisioned for delivery service are lightweight, meaning they can only carry small, light packages over short distances.

Although drones may end up improving on the traditional ways of delivering packages, they aren’t a silver bullet to vanquish the transportation industry’s emissions problem. For example, Wing’s drones can carry packages of up to 3 pounds, which could replace some trips to the store but not a delivery truck’s entire route.

“We do not expect them to replace delivery trucks for delivery of larger items, but rather to make them more efficient,” Wing’s Bass said in an email.

Drone delivery is not just a gimmick — companies will use it widely if it saves money, said Tyler Reeb, director of research and workforce development at the Center for International Trade and Transportation, based at Cal State Long Beach.

“It’s more of a calculation of risk and expense, with environmental benefits being a nice byproduct,” he said.