The Plan to Boost Drone Batteries With a Teensy Jet Engine 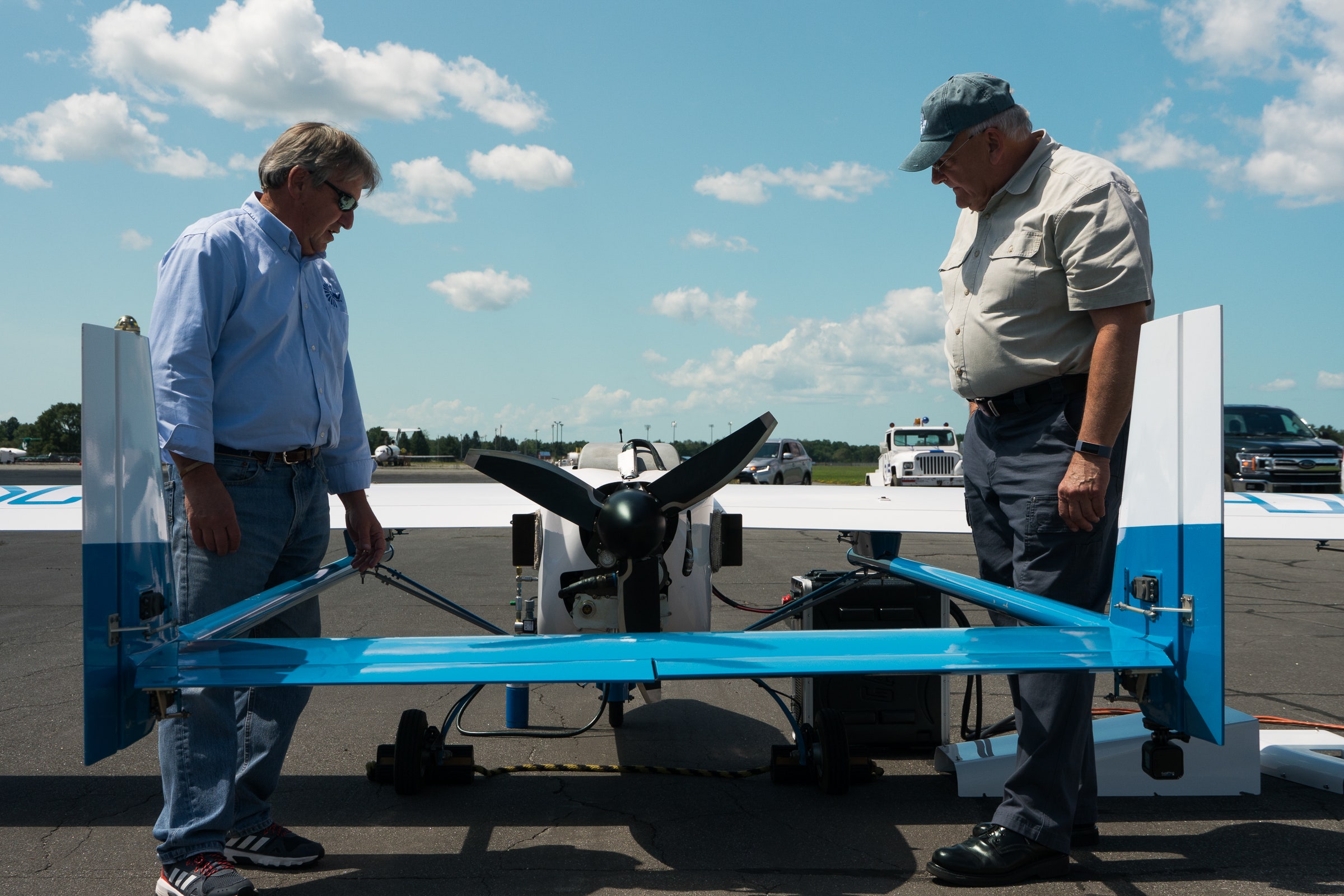 Kirk Warshaw (left), the CEO of UAV Turbines, thinks his watermelon-sized jet engine will be a key enabler for a new age of aviation.COURTESY OF UAV TURBINES

FOR ALL THE hype swirling around electric aviation, the current state of battery technology and electric powertrains remains a limiting factor for all the drones, air taxis, cargo haulers, and flying cars hoping to take off. Unhappy with that cap on the range, power, and speed of these aircraft, one Florida startup is taking a different tack. Rather than relying on batteries and rotors, UAV Turbines is developing a tiny jet engine.

Just this August, the Florida-based startup flew its first microturbine-based propulsion system, called Monarch 5, in a compact fixed-wing drone weighing about 500 pounds, with a 22-foot wingspan. This quietjet engine can power propellers, generate electricity for electric motors, or even produce its own thrust. And while pocket-sized jet engines have been boosting radio-controlled model airplanes for decades, the company calls the Monarch 5 the first commercial-grade microturbine.

Stay in the know with our Transportation newsletter. Sign up here!

“The small UAV market uses aircraft—typically 500 to 1,000 pounds—that are too small for real turbine engines but too large for just electric battery propulsion,” says CEO Kirk Warshaw. “As a result they’re using motorcycle or even weed-whacker-type engines ... Microturbine power can contribute to hybrid systems, generate significant power for vertical liftoff and landing.”

Jet engines—aka turbines—have long been renowned for their performance. They can send fighter jets to supersonic speeds or airliners halfway around the globe with hundreds of passengers on board. They can generate more reliable power for propeller aircraft than piston engines, power military tanks, drive cargo ships at sea, or sit in boxes, generating electricity for remote work sites. And while the airline industry has come under scrutiny for its contribution to climate change, jets have made impressive efficiency gains over the past half-century.

The limit to their usefulness comes not at the big end of the spectrum—jets power the world’s hugest planes and are growing larger by the year—but with the little flyers. The smallest of small turbines could power a light business jet or serve as auxiliary power units in larger aircraft, starting the bigger engines and supplying electricity when parked at the gate. Even those weigh several hundred pounds and are the size of a small refrigerator. Until now, there haven’t been any tiny turbines for drones, robotic ground vehicles, or any number of applications that would need efficient power generation beyond what an all-electric system can provide.

UAV Turbines formed in 2000 via a merger of three model plane companies eager to get into the then-nascent drone industry. They spent their early years upgrading their small turbine tech for more demanding work, sweating heat management fuel-burn efficiency and honing pressure ratios. “Modelers don’t need them to fly that long, so getting 20 hours from a single engine is more than a year’s worth of flying,” says Fred Frigerio, a senior vice president and program manager.

The team had to design a newly small recuperator, which uses the exhaust to preheat air entering the system, along with an engine control system to digitally manage the turbine’s performance and enable easy on/off cycles during long missions, when battery power might help out. They designed one of the smallest commercial-grade variable pitch propellers, which is common on turboprops and regulates aircraft speed by altering the angles of the propeller blades instead of revving the engine up or down.

The result weighs just 80 pounds and is a watermelon-esque 18.5 inches long and 12 inches in diameter. It generates 200 horsepower and runs on standard jet fuel, which Warshaw says appeals to potential military users who operate in remote locations where electrical charging infrastructure doesn’t exist. It doesn’t even have to make anything fly, he says: It could serve as an electrical generator for radar or communications technologies, alleviating the wear and tear on diesel truck engines that typically power such hardware now. In fact, the company already has a contract with the Army to develop the technology for its unmanned systems, and Warshaw says it has also been working with UAV manufacturer Navmar Applied Sciences—which supplied the drone, called a TigerShark, for the first Monarch 5 test flight—to develop propulsions systems for its military applications.

PREVIOUS：A fuel agnostic do it all engine for power anywhereNEXT：Parallel Flight Technology Has Lift Off!